This week has been a fun week and a week of lots of cleaning.  Henry got to play with all the puppies individually and was a good boy.  The puppies reactions to Henry ranged from hiding under the coffee table and couch to growling and nipping at him.   Henry took it all very well and was only a little to rough a couple of times and that is mostly because he is still a puppy and doesn't know his own size and strength.  Each puppy eventually got used to Henry and would brave a run across the room taunting him to follow and would grab his toys to try and play tug with him.

Carly got to come out a little but I am still trying to get her tail to heal, so she was limited. She was super cute playing with the puppies.

I was able to get one puppy out in a car ride so far, Derringer, she did very well.  She is very sweet and did well riding in the crate in the car.

Coming up this week are the puppies hearing tests and a visit with the stud dog's breeder in Atascadero.  I have some future owners coming on Friday to have a look at the puppies, it is all starting to be a bit bittersweet.  Oops....I cannot forget their six week shots and worming, too.

Here are some pictures enjoy!! (I certainly have been.) 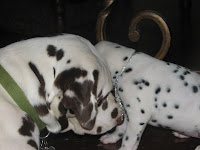 Posted by gypsyrddals at 7:04 PM